Why is RPA failing and will fade away? 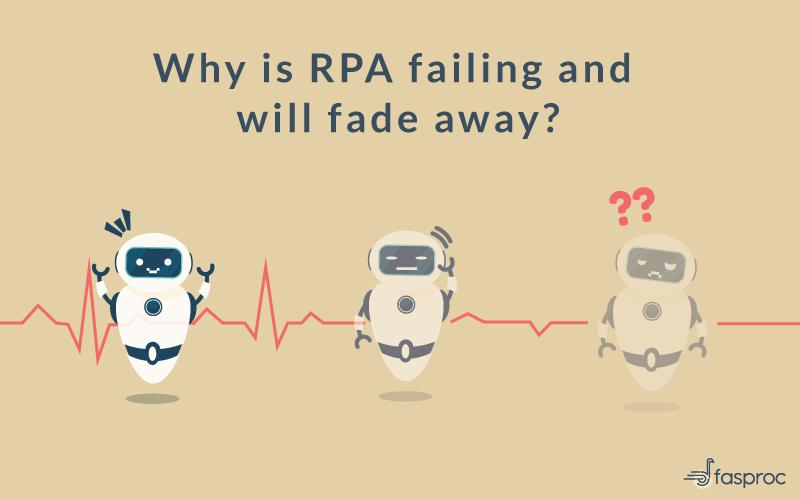 If you have followed trends of automation around the world or even follow an automation hashtag on social media, you would have come across this term called Robotic Process Automation (RPA). In this blog, we have dissected why we believe that RPA will fade away.

Short on time? Jump around any section

What is RPA anyway?

Before jumping into the reasons and analysis of why RPA will fade away in the future, let’s clear the noise and understand what RPA is anyway.

You must have heard the academic definition of RPA is a tool for automation. So we won’t repeat that. Here we are trying to show what RPA is in a practical real-life scenario.

Every RPA tool is marketed as “High tech Robots with AI and Machine Learning” while that’s not the case. RPA seems to be a new version of Macros and Scripts for Desktop Automation. It is like the same old wine in a new bottle. You can train your RPA tool to do menial tasks like copying and pasting and clicking buttons so that humans don’t need to put effort.

For example, you are a SaaS company and have the task of maintaining competitors’ data like the number of downloads on their app and the number of reviews left on a platform. An RPA bot will be helpful here. But first you will have to set up the bot by training it to mirror your movements.

One of the challenges, why RPA is so difficult, is the hype created around it. RPA is being overhyped by marketing people and vendors. They are promising that RPA is the future of automation to sell their product. While some see through this overpromised statement, some could not. They fell for it and realized the limitations and challenges of RPA as time passed.  In their article Burned by the bots: Why robotic automation is stumbling, they have said “While it may be possible to automate 30 percent of tasks for the majority of occupations, that doesn’t neatly translate into a 30 percent cost reduction. People do many different things, and bots may only address some of them.”

Other than this they have also mentioned bots creating issues every time there is a new update in the system. They have to go back and redesign all the automation which requires an intensive amount of time and effort.

Real Practical Business Process Automation is not about creating macros to automate one process. It is about integrating systems with people and processes to gain better results in everyday scenarios.

How are people using RPA? 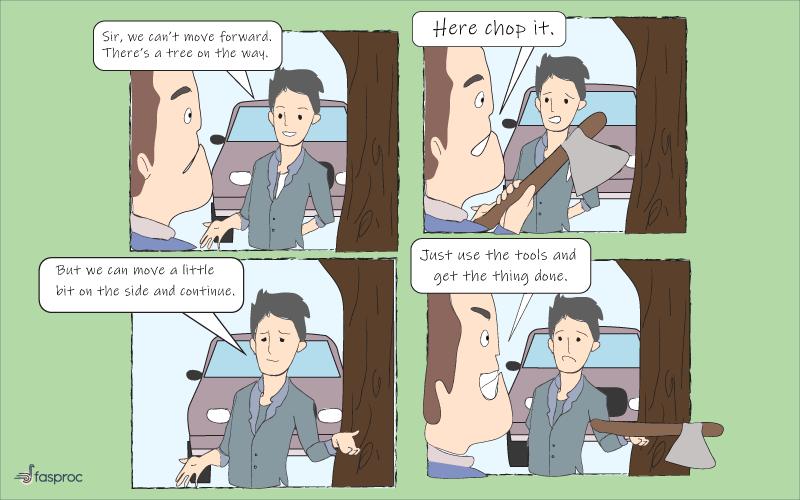 There are big enterprises who moved to RPA to extend their Legacy System. They were convinced that their current tech stack is outdated and need to update it with RPA. It is being used as a method of “Band-Aid Fix” to revamp the legacy system for modern challenges. RPA was perceived as cost-saving and less risky as it required almost no change in the existing system. This implies that RPA is a short term solution for these businesses. If a business wants to grow and achieve stability in its growth, it will have to look for a long term solution. When businesses use RPA to automate a bunch of tasks, they are masking the underlying problems with their processes as RPA tries to cover their legacy systems.

For example, A company is running its invoice process with a manual infrastructure or old legacy system, where APIs are not integrated with the solution. If this company decides to automate and start training an RPA solution to do their tasks, it won’t be innovative and effective for the long term. They are masking the real problem by using RPA. Instead of thinking in a broader perspective and expanding their technology, they are asking a tool to repeat what they have been doing for years.

Top-level authorities focus on throwing solutions and technology to the problems that are faced by executives. They should focus on identifying core process-related problems and the solutions to the same. They need to focus on the shifting demands of the new workforce and target markets instead of throwing tech at employees.

Now people are starting to realize the real issue against the original promise. People have found out that:

Limitations of the overpromised RPA 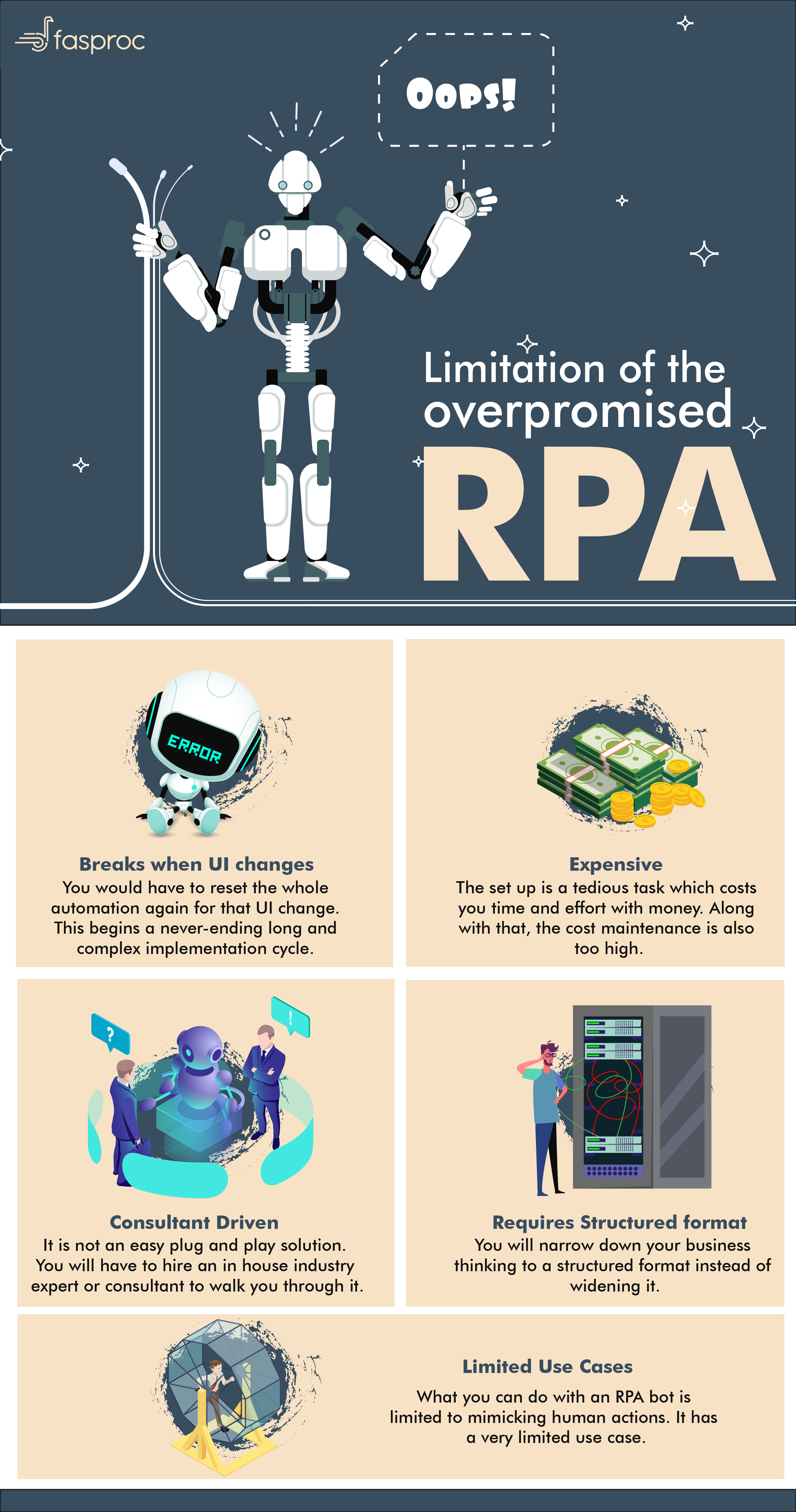 We wanted to understand what were the limitations of RPA that does not allow it to make up to the promise. We found out the following:

It takes a lot of effort and time to set up an RPA bot for your system. If a company is doing it on a large scale, it becomes difficult to set it up in the first place. Just in case you go through all the pain of setting it up, it would totally collapse with a simple change in UI. You would have to reset the whole automation again for that UI change. Robots need to be trained often on any business level changes. This begins a never-ending long and complex implementation cycle.

“Because RPA usually interacts with user interfaces, even minor changes to those interfaces may lead to a broken process. After all, robots can’t adjust their behavior the same way a human would.”

One of the biggest downsides of RPA is expensive. Businesses especially SMEs and startups are generally not ready to pay such an amount for automating a few tasks. Other than it being a tedious task to set up, the setup cost limits RPA from being a useful product. Along with the set-up cost, the maintenance cost is too high as well.

RPA products are not easy to use. It is complex and you need a high amount of expertise to set one up. The total cost of ownership of an RPA includes a bug cost of implementation services. Either you have to hire an in-house RPA expert or work with a consultant agency. It is not an easy plug and play solution. Imagine a product so complex, there’s a whole industry for making it work. Also, this is not just a one-time thing. As mentioned earlier, you will have to incur this cost of consultation every time you change the process.

Businesses need to have structured data to implement RPA. Businesses force the employees to adapt to the system instead of building a system that compliments the business. If we extend the earlier example of creating invoices, there are possibilities that suppliers or service providers can create invoices in different formats.

Every ad or promotion of RPA that you will see will probably give you the same example on how RPAs can mimic human actions. Software robots can open an email, open attachments, complete forms, extract data, and perform tasks like humans. That’s what an RPA does. We have not witnessed a large scale implementation of RPA for use-cases beyond creating invoices and procurement processes.

The core concept of managing your business processes through the discipline of BPM was good. But it became traditional as it ended up being more bureaucratic and complex. Today’s modern SaaS world has got many emerging solutions that take an innovative approach to solve Process Automation Problems. This reflects the present and future market and what this generation of workforce needs.

Modern Integrated Process Automation is a product category that has the ability to deliver results in a dynamic environment without many limitations which RPA depicts. Processes are linked activities and you need to keep a dynamic approach to succeed at process automation.

Keeping these problems in mind, we are building a platform to serve as the future of fast process automation, Fasproc. If you want to fix your processes and become a part of first-ever users of our Fast Process Automation platform, join the beta list now.

If you have any doubts or queries regarding process automation, you can feel free to ask it in the comments down below or send an email at hello@fasproc.com. We’d be happy to help you.

Be the first one to know when we launch fasproc