Why rebranding to Fasproc was fundamentally accurate for our brand? 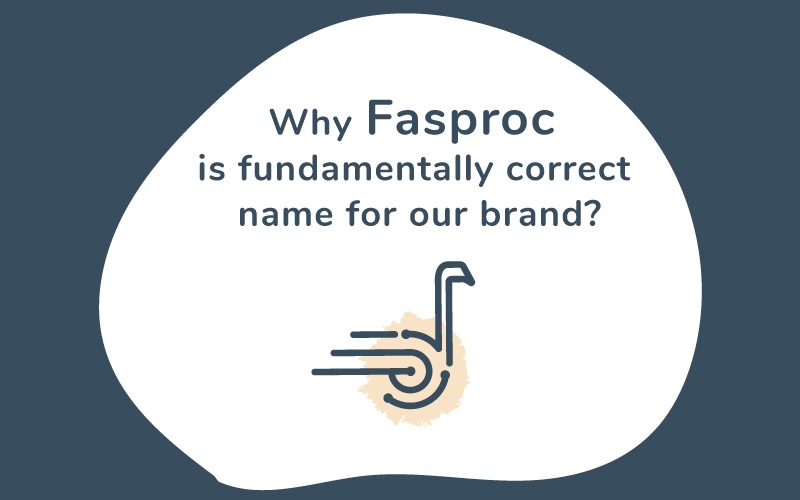 When we started the company, we started it with one simple idea. The idea of empowering businesses to build their business process the way they want. Flexibility, Customization and Simplicity were at the core of this idea.

The name Ostramics came from the fusion of two words. Ostrich and Dynamics. It was a quick wordplay in the initial phase of the company when the problem statements were a blur. This was when the first thought of implementing a rebranding strategy came up. It is really important to know when to rebrand.

After a lot of research, we started getting clarity about the market. The BPM market is very broad and spread through many industries. We conducted interviews of customers who have intense exposure to BPM products.

We found out some interesting facts about the way BPM products are solving the market problems from these interviews :

I wanted to focus on greater value for the customers. That could not have worked with just a better product. That’s why it had become a necessity to come up with a fundamentally new concept solution for the core problem of processes. It was the first step of our rebranding process.

That’s when we internally started asking questions regarding the difference that we were going to make in the market. In the hunt for answers, we identified 2 major shifts in the customers’ world. 1. Next-Generation Workforce and 2. Customer obsessions.

We kept our gut feeling aside for a moment and started digging from the customer’s point of view with primary and secondary research.

As a result, we found out that the core problem is that processes are slow and that’s impacting the businesses significantly. After knowing that slow processes are the biggest problems and identifying solution concept for that, we took the position-first approach instead of the product-development approach. We wanted to define “FAST PROCESS AUTOMATION” as our biggest narrative. Fast is not just an adjective, it’s a new market category. That’s what we want to be the outcome of this rebranding.

That’s when we had an epiphany that the name “Ostramics” was less relevant to our positioning and had become abstract. We decided to double down the narrative by embedding our core value proposition in the name itself. So when we named it Fasproc, it was with an underlying idea of Fast Process Automation.

I know it may seem risky to build a brand around one attribute but we feel that the promise of fast process automation is the base of our existence in the market.

Other than our value proposition, there was a secondary trigger behind changing the name too. The old name was difficult to remember in the first meeting or the first time a person heard it. There have been times where I was introduced as the founder of ‘Ostramatix’ and ‘Ostramation’. This implied that it’s complex for people to recall the name.

Except for our inner circle, Ostramics was not known to our target market because we are at a pre-launch phase.  We had less brand equity to lose even if we rebranded. Now, we are prepared with the strategy better than ever. The new positioning theme and core value proposition with the target market are crystal clear. This was one of the main reasons which convinced us to change our identity.

People might argue with this decision by saying, ”What is in the name?” or “What’s the big deal?”. However, I believe that name is the first step in the relationship between the company and the customer. We want to stand up for something big and we want to reflect our core identity in the name itself.

Be the first one to know when we launch fasproc